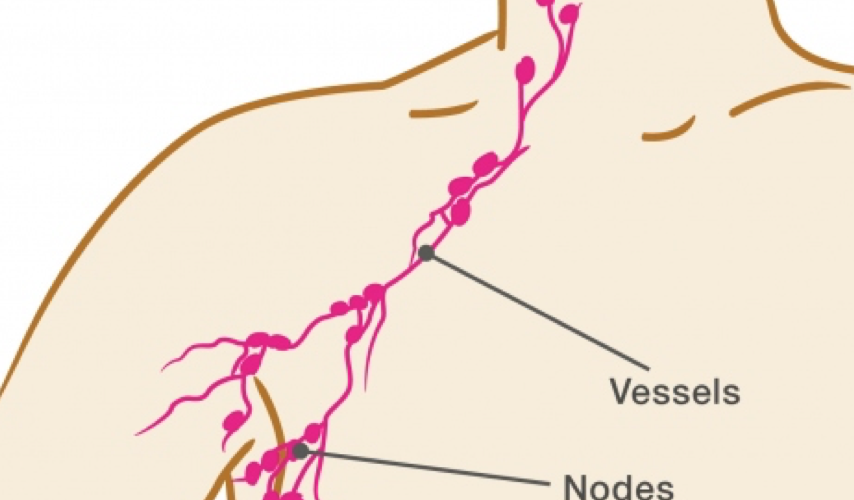 Breasts contain a network of thin tubes called lymph vessels. These are connected to the lymph nodes (glands) under the arm.

If breast cancer spreads, it typically goes first to nearby lymph nodes under the arm. It can also sometimes spread to lymph nodes near the collarbone or near the breast bone. Knowing if the cancer has spread to your lymph nodes helps doctors find the best way to treat your cancer.

What are Lymph Nodes

Lymph nodes are small, round or bean-shaped clusters of cells. Inside lymph nodes are a combination of different types of immune system cells. Lymph nodes filter substances that travel through the lymphatic fluid, and they contain lymphocytes (white blood cells) that help the body fight infection and disease. There are hundreds of lymph nodes found throughout the body. They are connected to one another by lymph vessels. Clusters of lymph nodes are found in the neck, axilla (underarm), chest, abdomen, and groin.

When you’re not feeling well, like you’re coming down with something, you may notice some swelling on the sides of your neck. Those lumps probably feel soft and tender to the touch — and may even hurt a little. Swollen lymph nodes (or what doctors call lymphadenopathy) are common and are actually a good thing. The swelling in these pea- or bean-sized lymph nodes are one of your body’s natural reactions to illness or infection. It indicates that your body’s healthy and robust immune system is working to clear away infection and/or invading viruses or bacteria.

Breast Cancer in the Lymph Nodes

The only way to know whether there is cancer in a lymph node is to do a biopsy. Doctors may remove lymph nodes or take samples of one or more nodes using needles. The tissue that’s removed is looked at under the microscope by a pathologist (a doctor who diagnoses illness using tissue samples) to find out if there are cancer cells in it. The pathologist prepares a report, which details what was found. If a node has cancer in it, the report describes what it looks like and how much was seen.

When a surgeon operates to remove a primary cancer, they may remove one or more of the nearby (regional) lymph nodes as well. Removal of one lymph node is considered a biopsy, but when many lymph nodes are removed, it’s called lymph node dissection. When breast cancer has spread to lymph nodes, there’s a higher risk that the cancer might come back after surgery. If you’re facing breast cancer, be sure to talk with your doctor about the likelihood of the cancer spreading, and get details about how they’ll plan to treat it if it does.